word on the waves

From trade shows to new affiliates, international
resellers to unique features, there’s always
something new to talk about with Radio.Cloud. And
now you can keep up with what’s happening in our world. 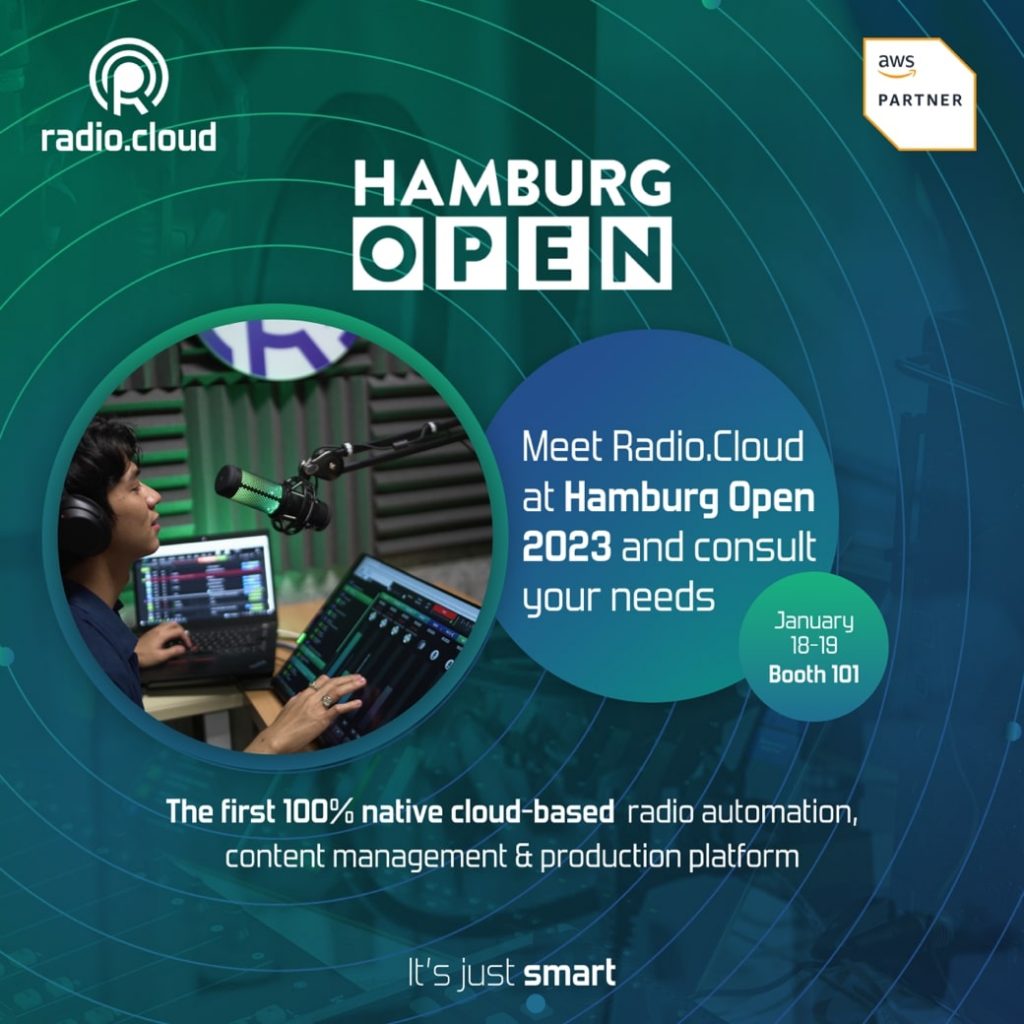 Radio.Cloud Heads to the Hamburg Open 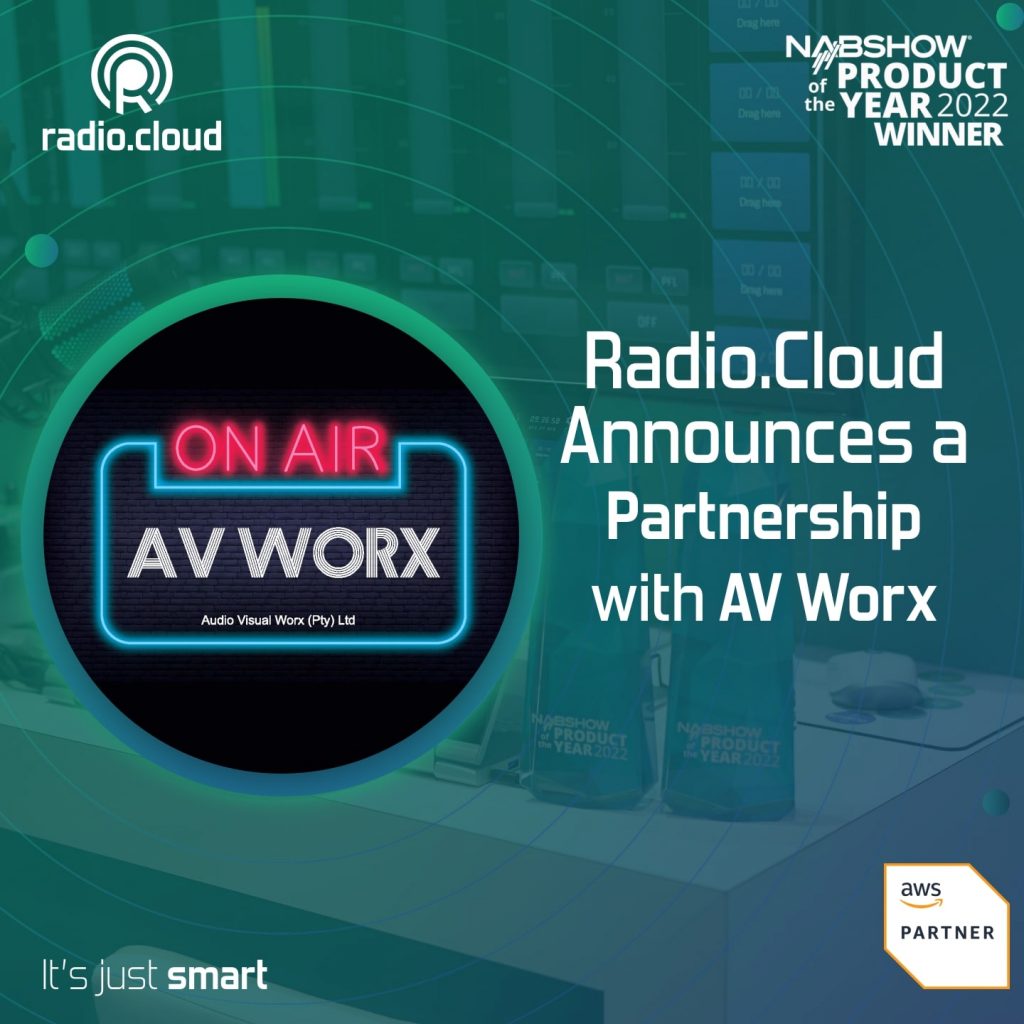 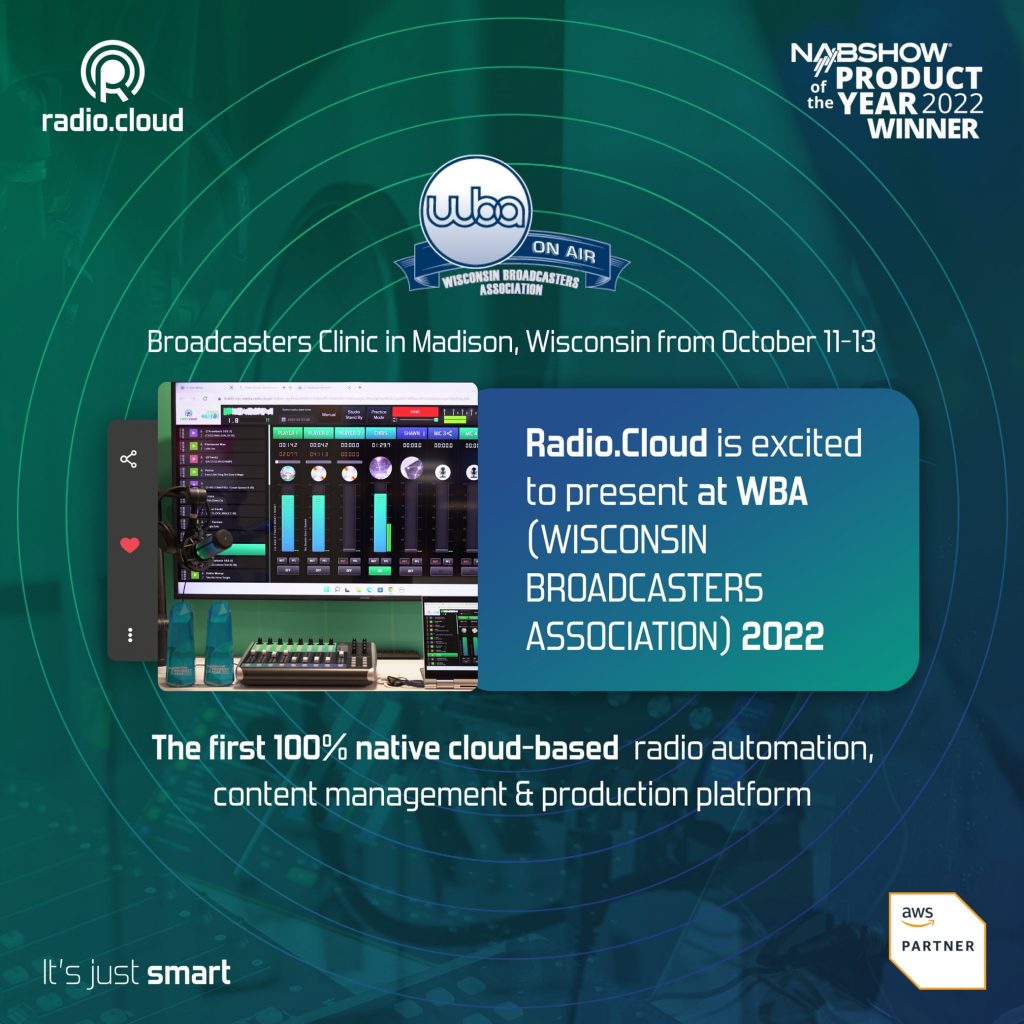 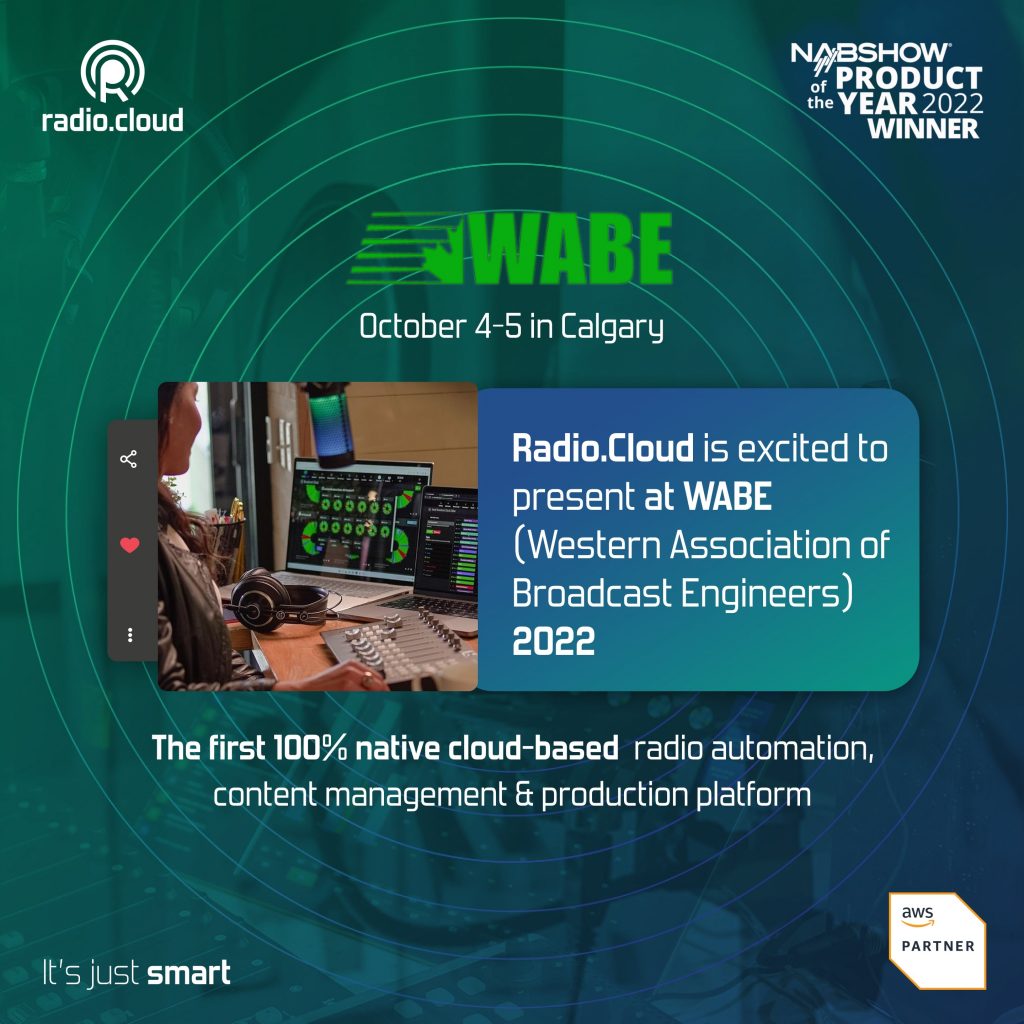 Radio.Cloud Back in Canada for WABE

Spreading the word about Radio.Cloud to Western Canada 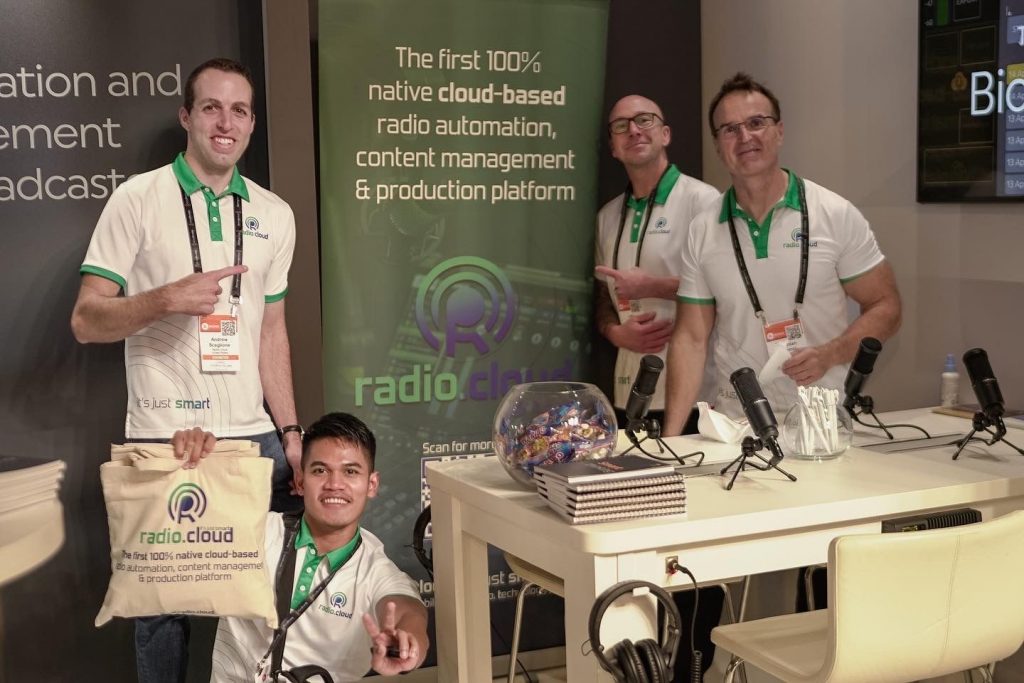 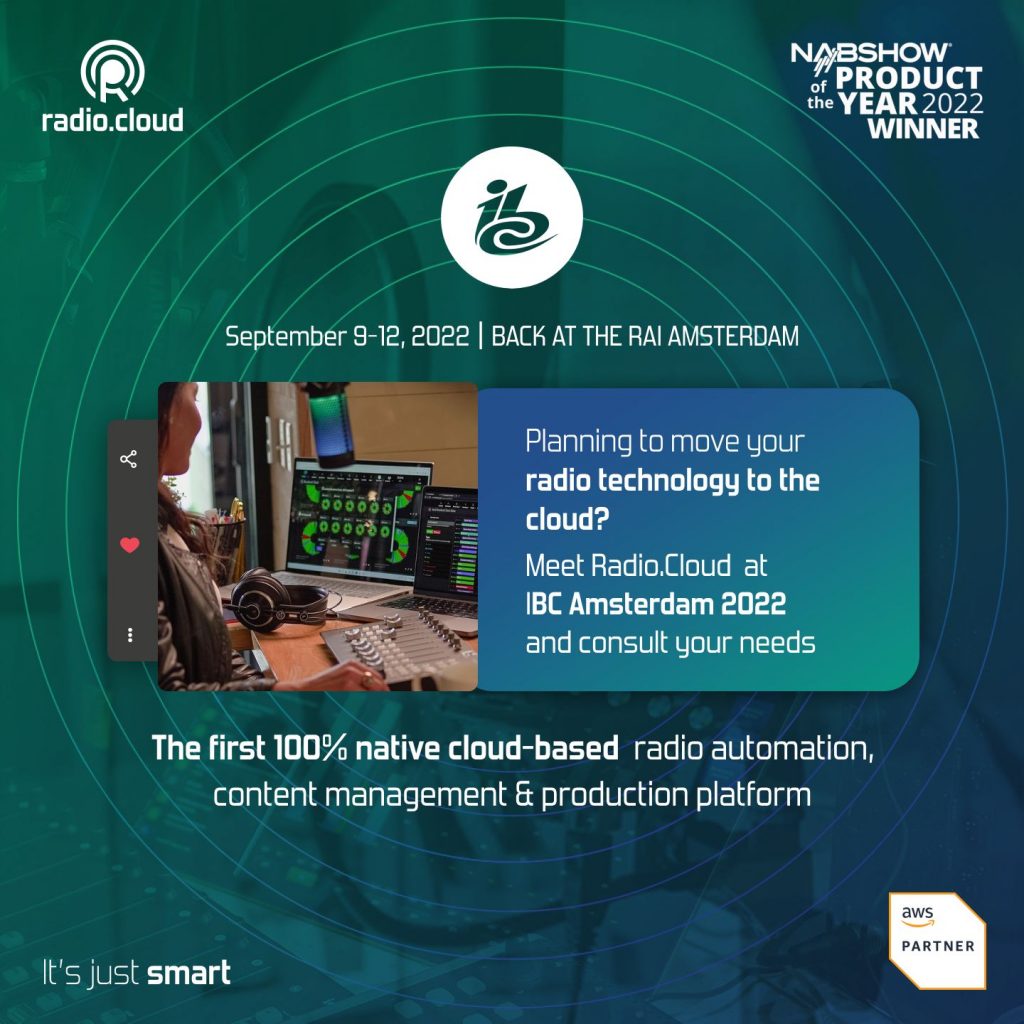 Radio.Cloud to Exhibit as IBC Returns 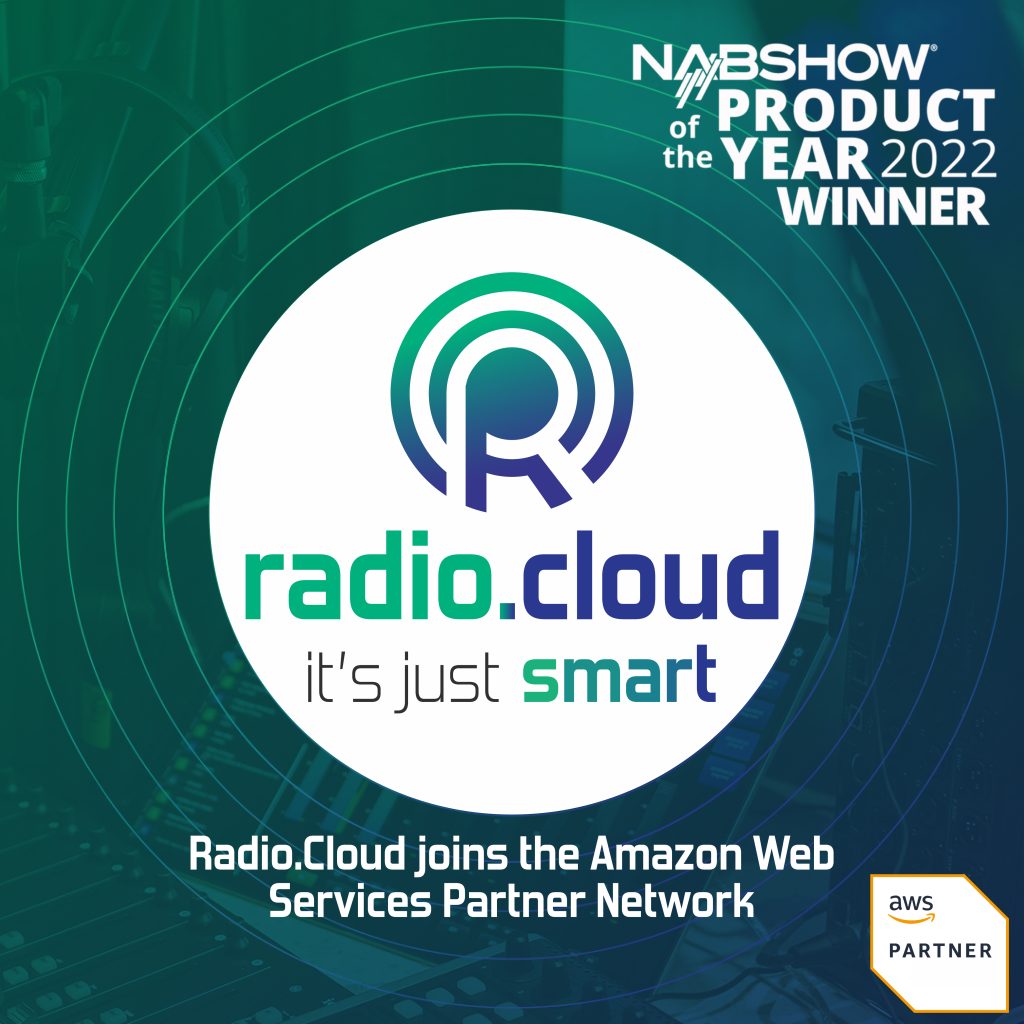 Will leverage the power of the cloud through Amazon Web Services 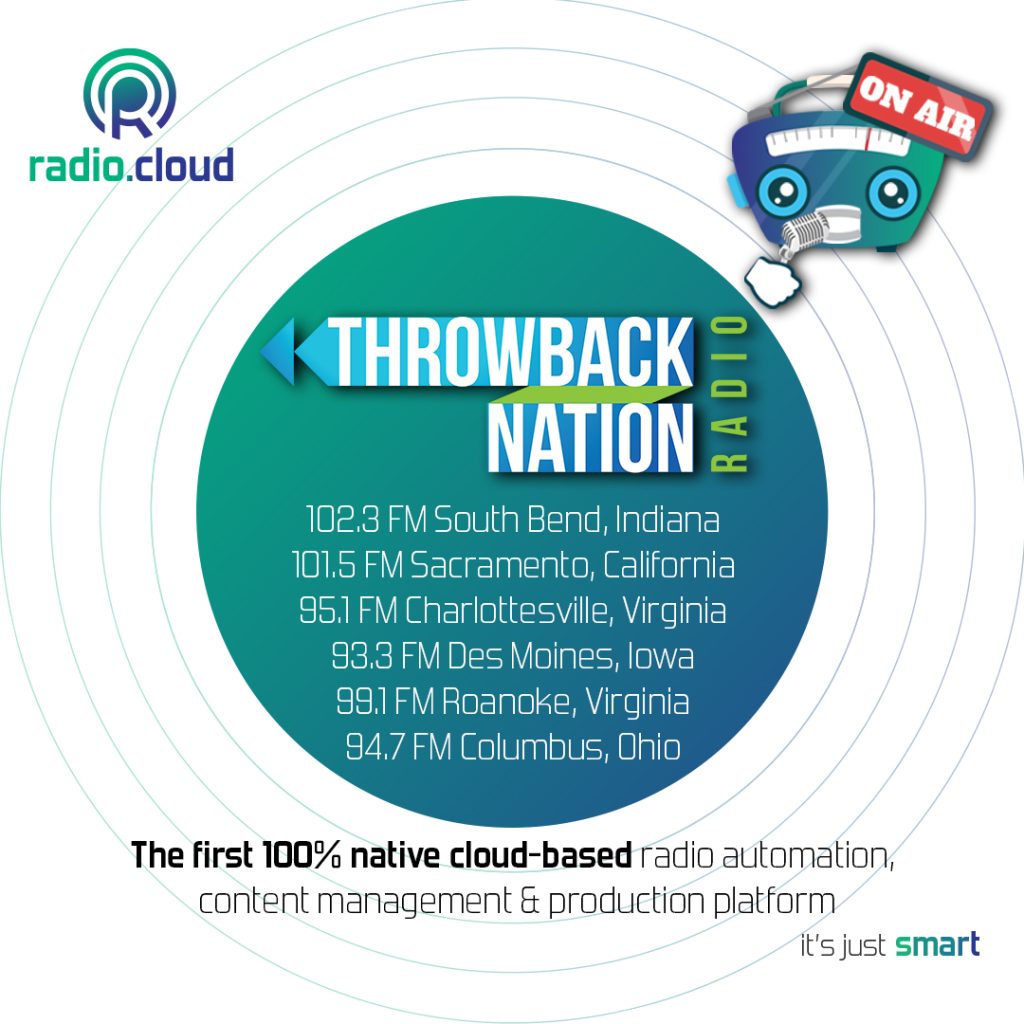 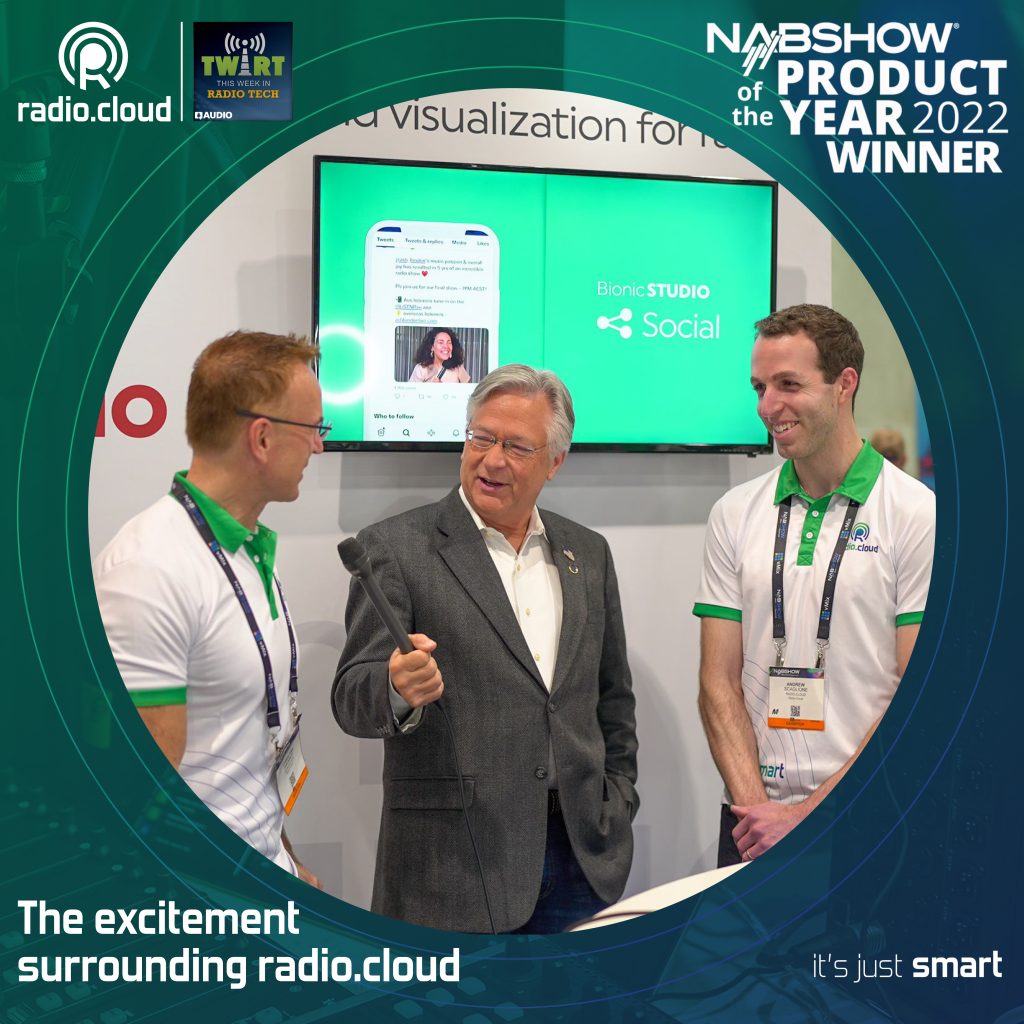 After winning two NAB Product of the Year awards in Las Vegas, CEO/Managing Director Christian Brenner and Account Director Andrew Scaglione joined This Week in Radio Tech’s Kirk Harnack to talk about the excitement surrounding Radio.Cloud. Radio.Cloud appears with Kirk from 18:55-24:02 in the below video. 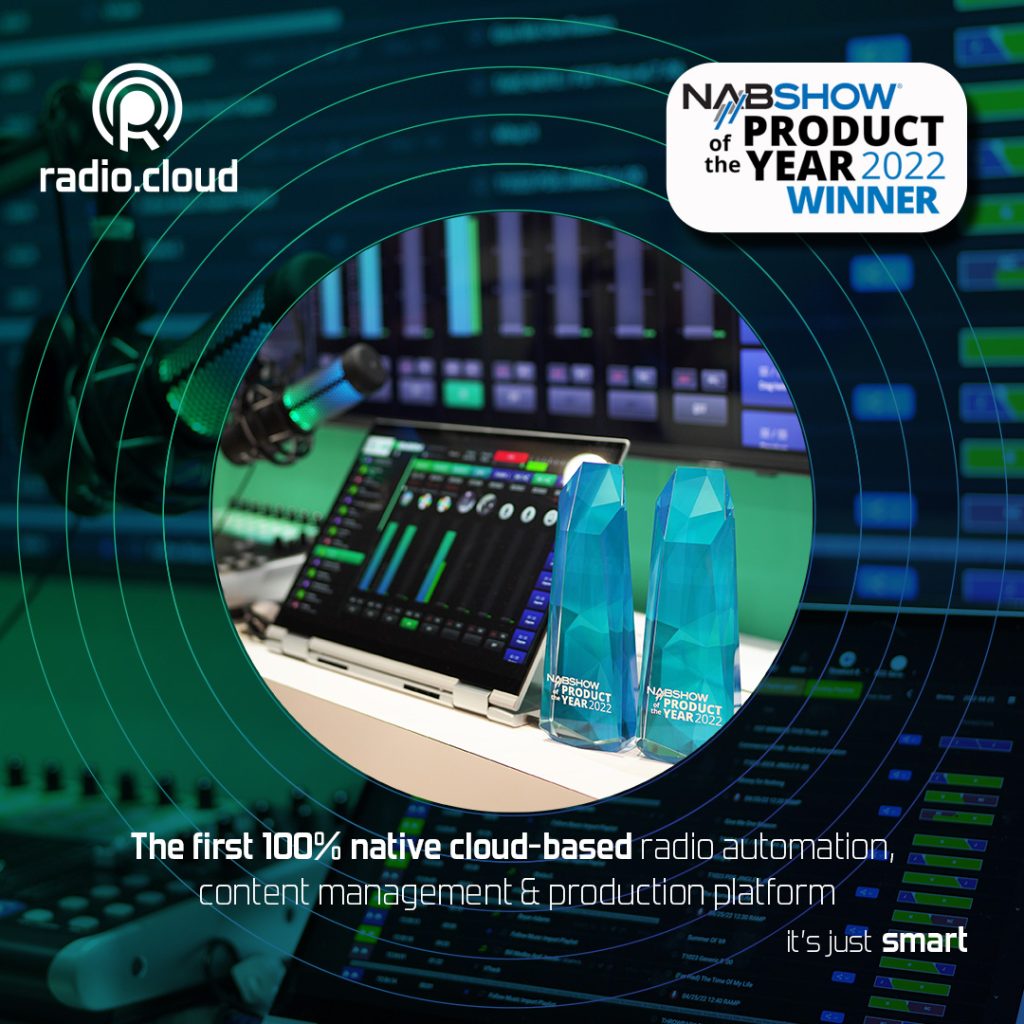 Radio.Cloud was honored by the NAB Show as a two-time Product of The Year winner in 2022. With wins in the Radio category and Asset Management, Automation & Playout category, Radio.Cloud was one of eight companies to take home multiple awards.  “The 2022 NAB Show Product of The Year Awards honor innovative breakthroughs that will change the way the media and entertainment industry creates, connects and capitalizes content,” said Chris Brown, NAB Executive Vice President of Global Connections and Events. There are 15 categories in the NAB Show Product of the Year Awards, which recognize the most significant and promising new products and technologies exhibited at the show. The awards are judged by a panel of industry peers. For the complete list of the winners, you can access by click on this link: https://www.nab.org/documents/newsRoom/pressRelease.asp?id=6468   CEO and Founder Christian Brenner said, “I couldn’t be prouder of what we achieved as a team over the last three years. Many predicted ‘it can’t work – doing everything in the cloud’ and now we not only have more than 160 channels on air from the cloud, but also have re-invented how radio operation and syndication can be done. The feedback at our booth discussing with hundreds of radio professionals tells me that we are on the right track.”  “This week has been the culmination of years of hard work by our development team around the world,” said Account Director Andrew Scaglione. “The response to our completely cloud-based solution was amazing and I’m excited to see where the next year takes us. We look forward to continuing to partner and bring innovation, automation, and creativity to the market across the media and entertainment industry.” Radio.Cloud is the first 100% cloud-based radio automation, content management and production platform in the industry and now features a live assist platform. The company has 160 affiliates in Germany and a handful in the United States including Throwback 102.3 (WYET-FM/South Bend, IN) and 101.5 K-Hits (KCCL-FM/Sacramento). Learn more about the platform at https://radio.cloud/, and contact us by clicking on this link: https://linktr.ee/radiocloudusa. 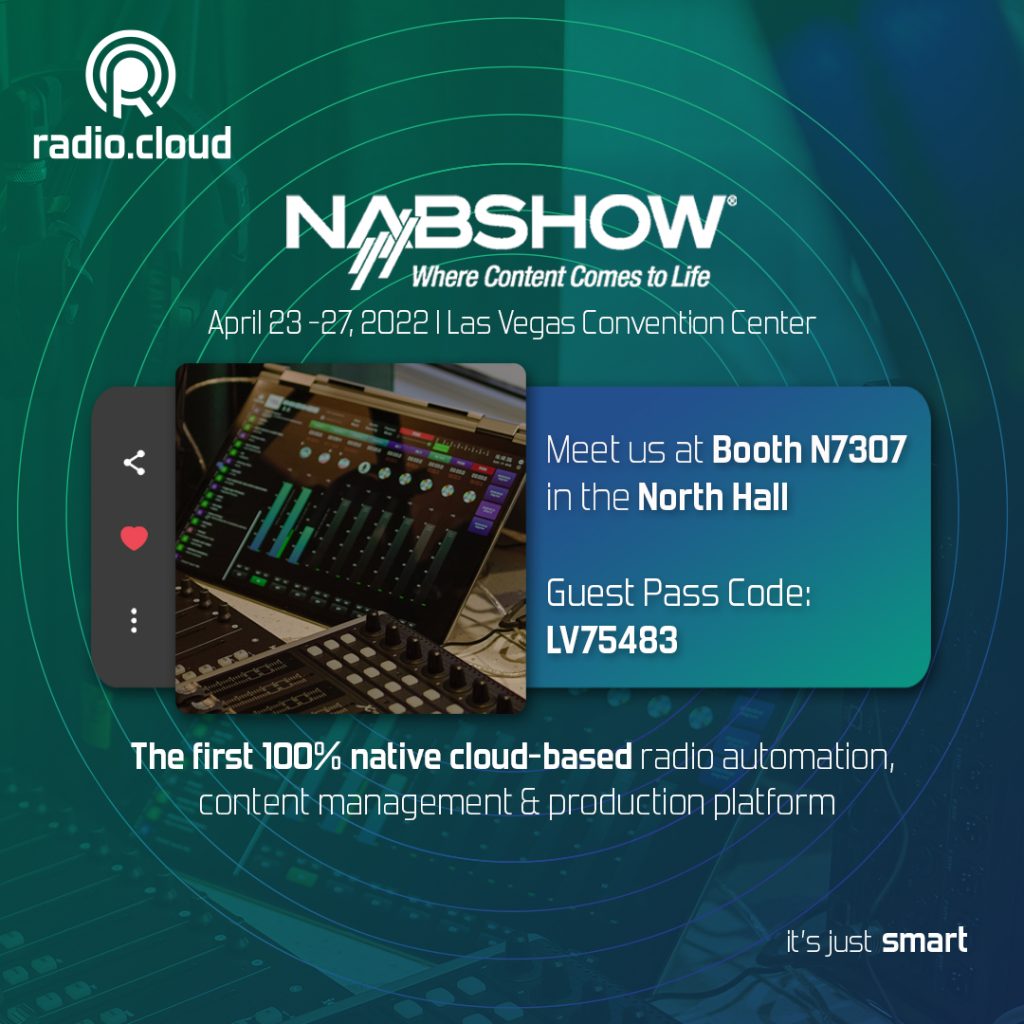 NAB Show is an annual trade show produced by the National Association of Broadcasters. NAB is the world’s leading marketplace for unbridled innovation, unmatched connections and transformative technologies shaping the future of media and entertainment.   For this occasion, we are pleased to offer you a Free Exhibit Pass: LV75483  Come and visit us at booth N7307 in the North Hall at the Las Vegas Convention Center to discover how our cloud-based automation system can be your broadcast solution, and a gateway to the future of radio. Radio.Cloud will showcase its latest advancements including “Live Studio” and all features that give broadcasters the freedom to focus on creating better, livelier, and more engaging radio shows.   Looking for a solution that is built with your needs in mind? We’ve got you covered.   Contact us by clicking on this link: https://linktr.ee/radiocloudusa. 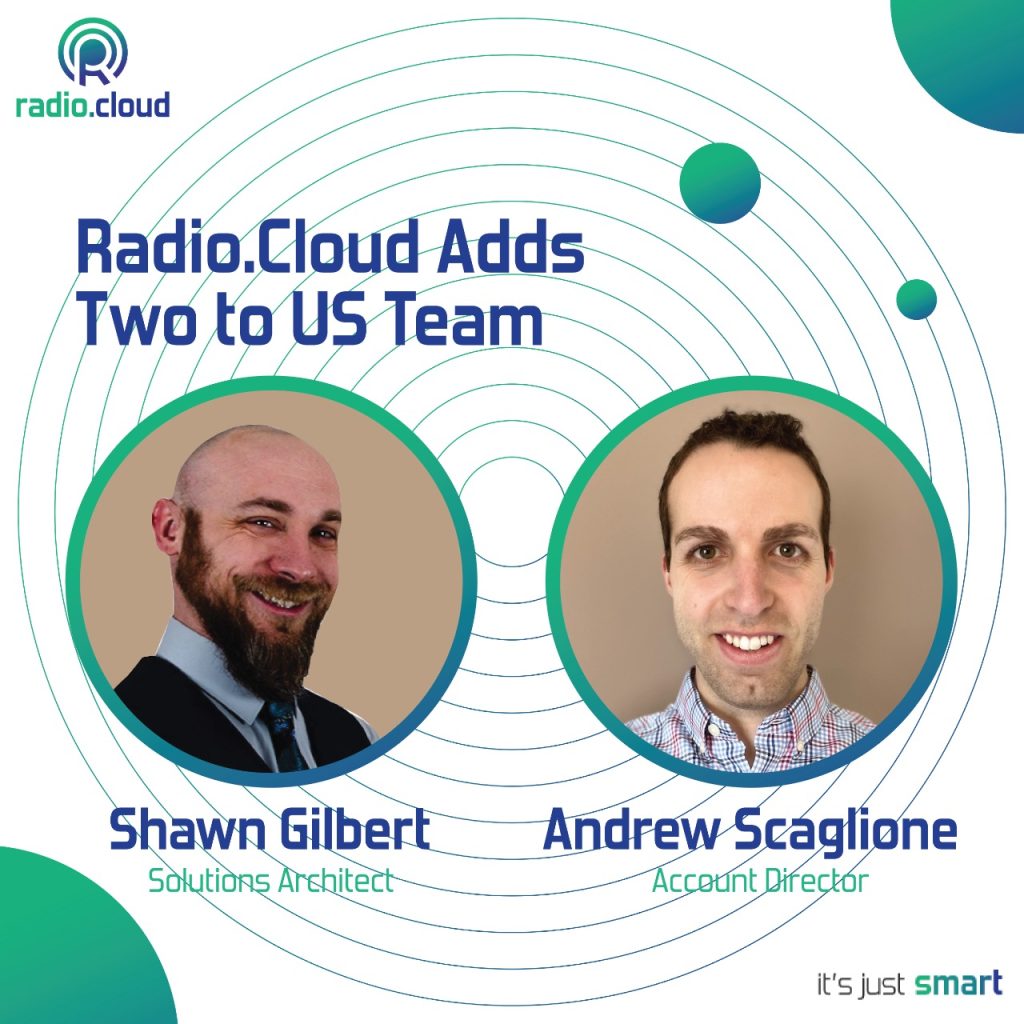 Radio.Cloud Adds Two to US Team

With the addition of two new team members, German company Radio.Cloud solidifies its presence in the United States. Shawn Gilbert joins as Solutions Architect and Andrew Scaglione is the company’s new Account Director. Gilbert has worn many different hats for numerous radio companies including iHeartRadio and Alpha Media and boasts a background as a District Manager in retail. “As soon as I saw Radio.Cloud I fell in love with it!” Gilbert said. “This is where radio and broadcasting are heading and I’m very happy to be a part of such a forward-thinking company.” Scaglione brings five years of experience in the radio and television world to the table, most recently as Director of Affiliate Operations for G Networks/Gen Media Partners. Prior to that, he worked in affiliate relations for Envision Networks/Sun Broadcast Group. “Getting in to help grow Radio.Cloud from the ground floor is extremely exciting,” said Scaglione. “The platform is cutting edge and perfect for both the current and future US radio market.” According to Jim Hammond, the company’s Chief Strategy Officer, “We are so fortunate to have both Shawn and Andrew join the Radio.Cloud team. Together they bring a unique set of experiences to the new frontier of 24/7 cloud-based radio broadcasting. With a deep knowledge of the industry and superb customer service, the pair offers years of on-air, content creation, network affiliate relations and programming experience. Together, Shawn and Andrew provide a great foundation as we continue to build our team.” The Radio.Cloud team is set to display its current platform and debut a new live offering at the NAB Show booth N7307 in Las Vegas from April 23-27. Radio.Cloud is the industry’s first 100% native cloud-based automation, content management and production system. Congratulate Gilbert here and Scaglione here. Read more about the additions in RAMP and All Access. 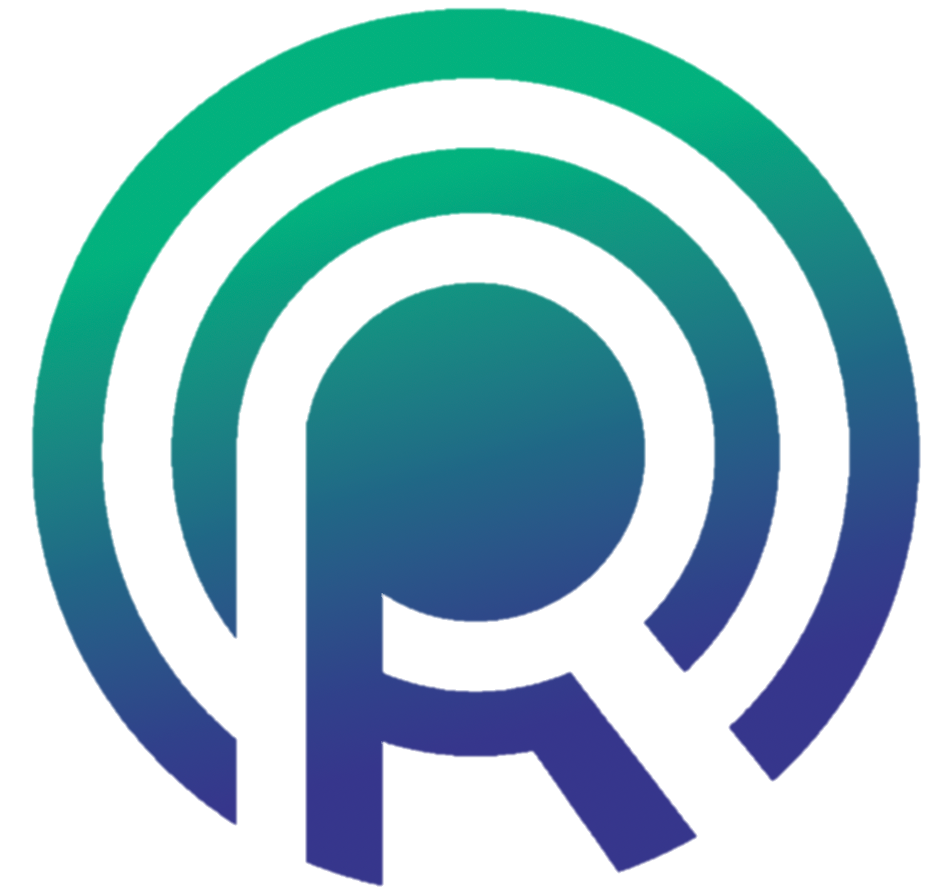 With the addition of its first United States customer Throwback Nation Radio, German software company Radio.Cloud officially enters the US marketplace. Led by industry vets Christian Brenner and Jim Hammond, Radio.Cloud is the first 100% native cloud-based automation, content management and production system and has been on-air for more than three years in Germany with over 150 affiliates.     Brenner, CEO and Managing Director, is an entrepreneur and innovator that has set up numerous radio and TV stations. He created SmartCast (now part of satellite operator SES – formerly GE Americom), a software-as-a-service solution that localized content management for Disney, Fox and Cartoon Network in many different Asian countries.     “It was exactly four years ago when a German Radio Group with 50 affiliates asked us to completely revolutionize their network with 100% flexibility and AI supported functions,” Brenner said. “This was shortly before the NAB, and we couldn’t find a solution in line with what they wanted. So, I thought, ‘let’s build something new to support the radio industry.’ I hired 25 people, we got to work, and one year later the first station went on air with Radio.Cloud.”    Hammond’s career has spanned more than 50 years worldwide, working as a teacher, consultant in multiple countries and group general manager and engineer. He spent decades at some of the leading automation companies including 11 years with Scott Studios and dMarc, over 3 years at Google and another 11 at WideOrbit.     “When I first saw Radio.Cloud, I was a little skeptical as this was the elusive unicorn that others had dreamed of seeing. And I quickly realized what a significant tipping point this represented for the broadcast industry,” explained Hammond. “Sure, there were others that offered cloud storage and disaster recovery, but that is something most people do with cloud backup every day at home. To provide true cloud-based playout with the use of microservices, triple-backup, 24/7 monitoring and leveraging the reliability and security of industry standards Azure and AWS is something altogether different. It hit me like lightning.”    The Radio.Cloud team is set to display its current platform and debut a new live offering at the NAB Show booth N7307 in Las Vegas from April 23-27. Read more in All Access, Inside Radio, Radio & Television Business Report, and Radio Insight. 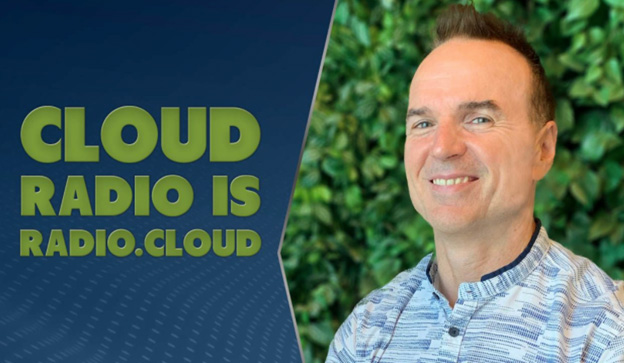 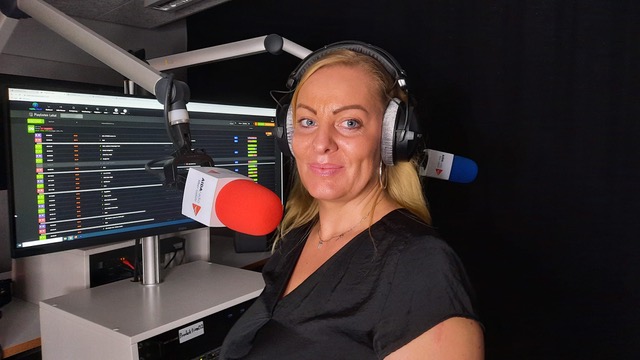 Big news for Radio.Cloud as their advanced cloud-based technology was selected by Aida Radio to launch their new programming on Aida Cruises (part of Carnival Corporation) in October 2021. Hear from Eva Piorko, Aida Radio’s Program Director, how Radio.Cloud makes her job easier while programming on one of German’s biggest cruise ship companies. Your browser does not support the video tag.

Some text in the Modal Body